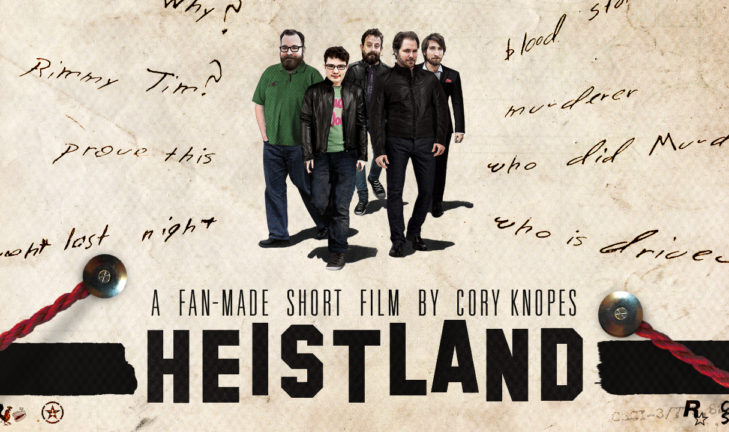 So, I started this as a means to an end, to teach myself the basics of video editing and compilation. I have, in the past, created short videos (some of which have gained considerable attention), but those have only ever been as simple as cherry pie, spliced videos with overlaid music as means for emphasis. My background lies in design and that’s just where this project devolved into insanity. I wanted to take the same principles and techniques I followed with the creation of static images and apply them to motion graphics. And, such as the past, I sought out to create an ode to my favorites over at Rooster Teeth.

Problem was… with every edit came a new idea, ad infinitum. I’d figure out something new and apply it to the next until my eyes bled and my fingertips sloughed off. I’ve eaten it up… though, admittedly, it turned into something of a time sink. It’s rough, poorly made and downright ugly at times, there’s countless things to chance and fix. But my child has grown far too old, and I’ve lost all sanity to continue. It’s time to let it out into the world.

And without further adieu, here is Heistland:

This has been, quite literally, the most intensive project of my life thus far. Clocking in at a good six months of screen time (though, not the focus of my daily efforts). It contains 34 video projects, an average of 20 layers each. 104 image compilations, with around 50 usable layers per. And that’s not even counting the original music, score, and sound design. All totaling 4,720 files.

It never helped that my workflow is a mess, I’m quite thankful to have learned to keep that shit in check for next time. But I can’t say I’m not happy with the outcome. My baby, after six months in the cerebral womb, has finally come out, kicking and screaming, flaws and all. And it all started with this scene. 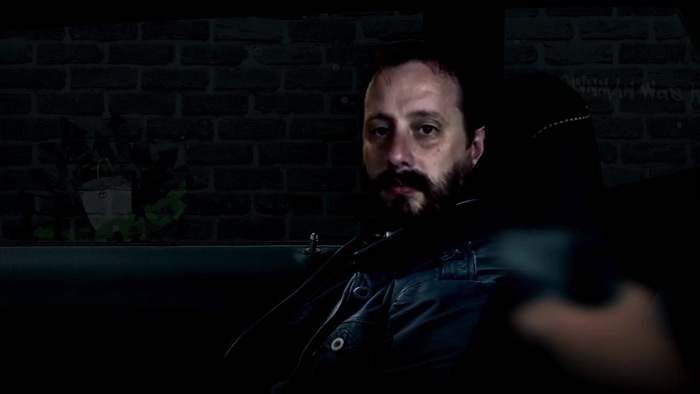 It’s not grandiose by any means, but this was the scene that taught me about limitations. My current build might as well be antique at this point, barely able to chug along with basics, rendering my computer completely unusable while… well… rendering. Almost all of my assets were designed in eye-watering 4K, but I quickly found it improbable that I could sit through even one render without a stiff drink or six. 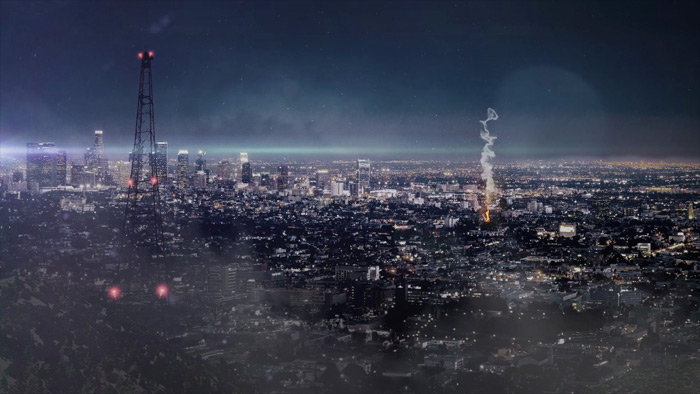 My style is simply composition, building upon buildings, and that tends to lag a system down.

As such, I made the decision to forego becoming the next Nolan and settle on 780p. IMAX eat your heart out. It doesn’t look perfect, but I knew it never would. Though, admittedly, I still tried in vain to find enough lens flares to become Abrams.

Next, I needed a protagonist, and there came no question. 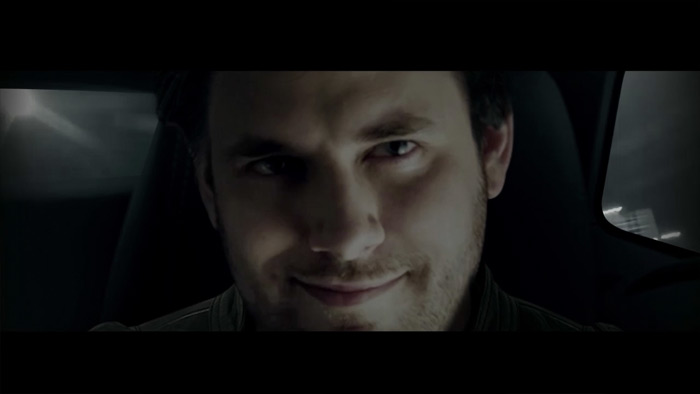 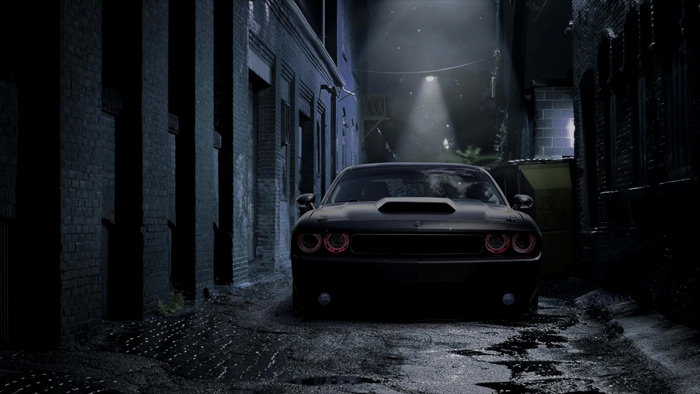 But with any good hero… there comes a villain. 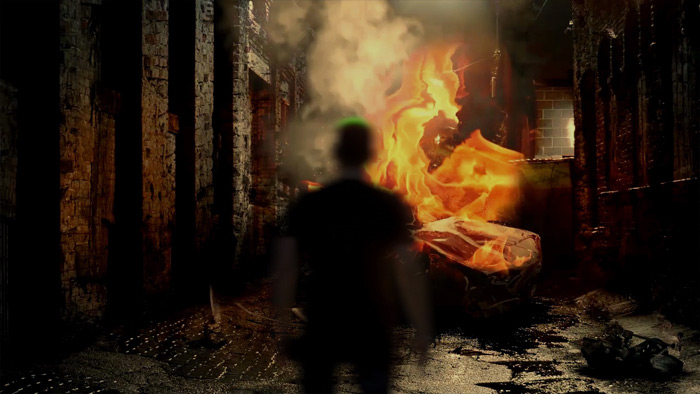 I’ve come to see Jeremy as the most genuine member of Achievement Hunter so, of course, he became the visage of evil. Seen early in the film in silhouette, he’s meant to embody the impending chaos. The wizard behind the curtain. 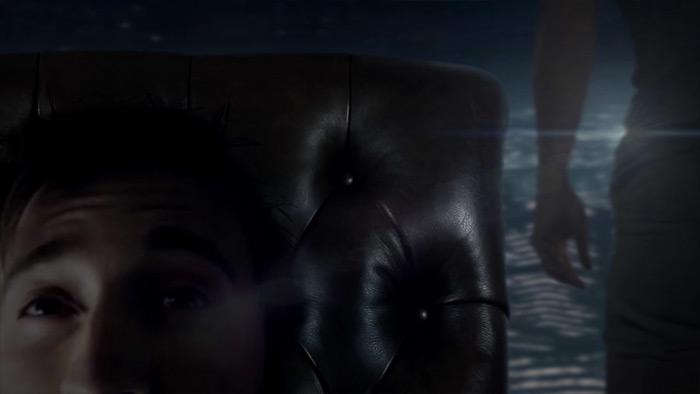 Then came the creation of, as labeled in my files, ‘the-doof-1.png,’ ‘the-doof-2.jpg,’ and ‘jack.png.’ Jack deserved better. 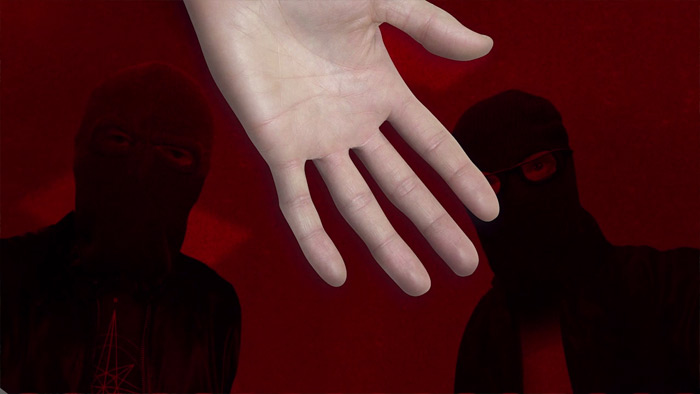 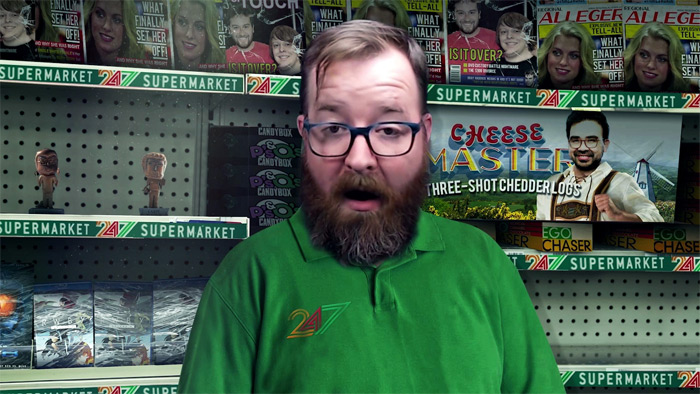 Jack, for the most part, was the hardest to include. My favorite of the AH crew, I easily denounce any joke to his character, but I still never expected what I found: out of all the individuals included he was by far the most animated of the bunch. Jack moves and jives with the best of ’em, but it’s easily a case of ‘when you do things right.’ It’s hell for tracking, though; the only scene I felt didn’t meet my standards.

In addition, just for the effort I put in to only have them half visible… here’s the tabloids. The chin was not intended, Kerry, forgive me. 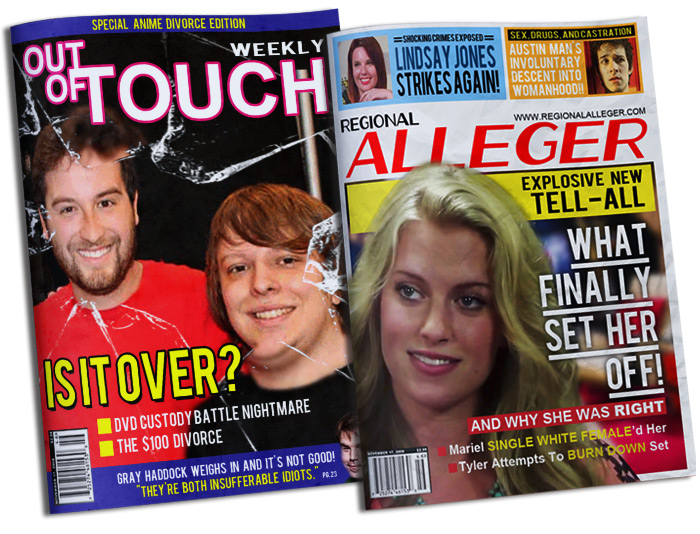 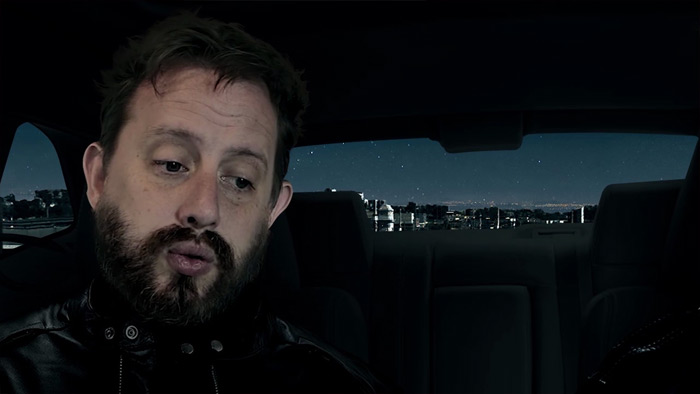 … because I want to vent.

Most others craft animations that sync with AH/RT audio… but my bright idea was to sync AH/RT audio to my animation. In retrospect, I wouldn’t wish that on my enemies. The visual side and sound effects of this film took place over the course of three months… and, used spectacularly less, the dialogue took the same. The main reason? They are constantly talking over each other.

I had three requisites for my dialogue, it all needed to be:

To put it in perspective…

The above audio snippet (of Gavin’s dialogue) contains audio from no less than three different videos, each lasting no more than a second or two. The majority of the clips ended up replaced because of unwanted audio—Michael screaming, Geoff crying, or Ryan yelling like a psychopath.

I believe I ended up listening to around 50 hours of their videos in the background, hoping desperately to find something useful. And, in this case, that work ended up providing only 20 seconds of dialogue. Not only a spectacular waste of time, but it also made it ridiculously hard to watch their videos as a fan… trying to spot the tiny bits of usable snuff.

Thankfully, the music was much easier to create. While the majority of the songs were created using purchased Loops for [Sony] Acid, I used a couple of my own personal recordings.

It just so happened that I had a song featuring the term ‘monstertruck.’ 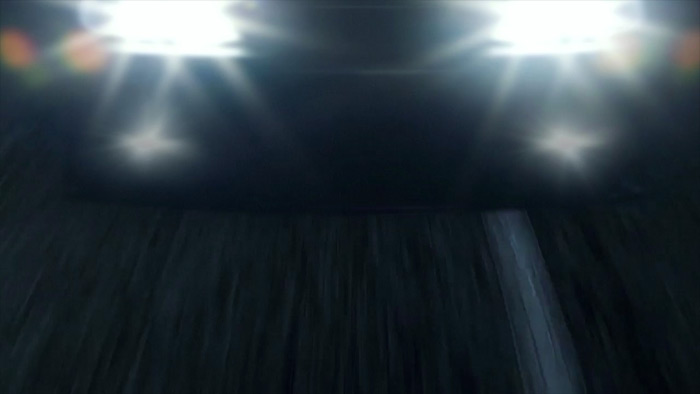 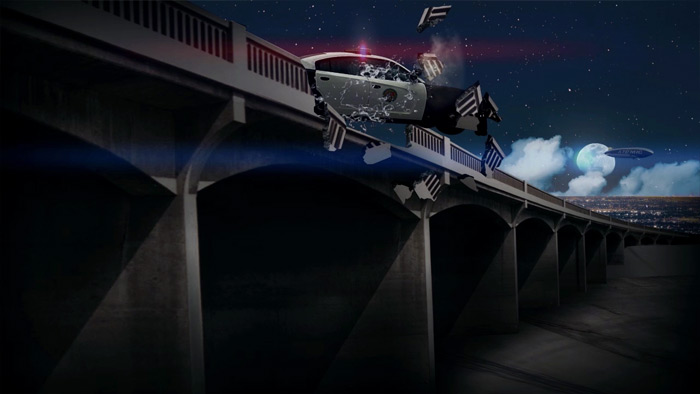 I had a lot in mind when beginning the credits section. It was originally intended as a massive, 10,240 by 5,760 pixel image, but as my computer chugged along rendering one even a quarter of that… I had to compromise. 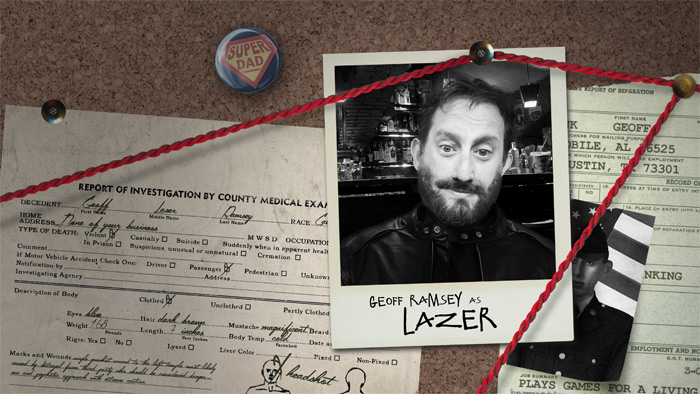 And, of course, I couldn’t make a ‘film‘ without an after credits scene. 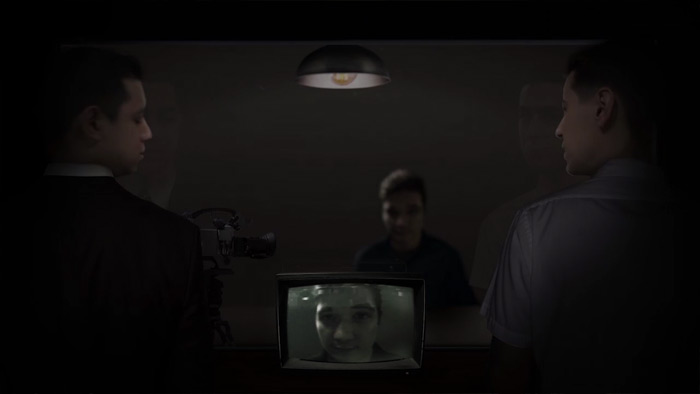 This was made, more so, because they hired that stupid Alfredo in the midst of this film’s creation and I’ve ended up loving him more than I ever thought I would.

I don’t regret a minute of it… well, except that one part. Farewell, Heistland. Whether you’re a hit or no one ends up caring, I’m crying either way. 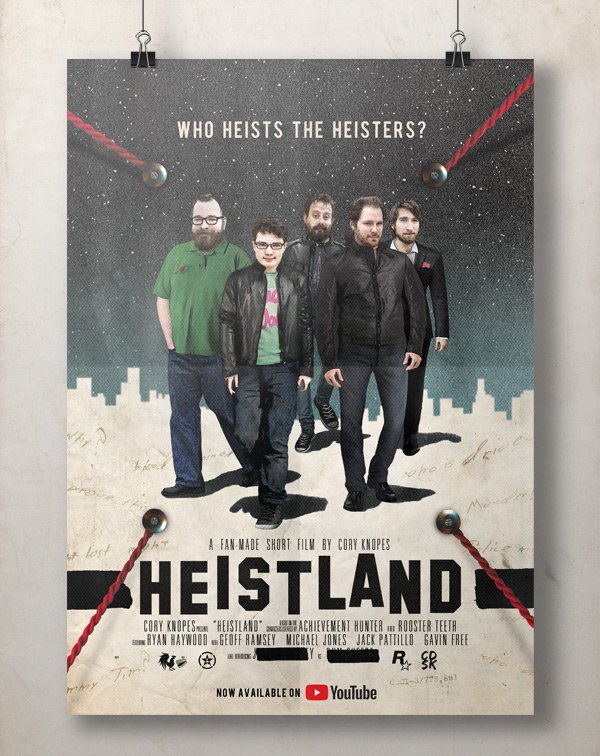